Festivals in the UK are a big part of British culture. The UK has a great history of internationally based festivals. From day long events to month long affairs – these events draw some of the greatest creative minds and performances from across the globe. Here are just a few of the best arts festivals in the UK…

Brighton Festival is one of the most inspiring arts festivals in the UK. It has a unique approach to organisation. Every year a “guest director” is appointed to take charge of the acts and exhibitions that take place across Brighton and Hove. In the past this has included the experimental musician Brian Eno, and the leader of the Burmese democracy – Aung San Suu Kyi. This year children’s poet Michael Rosen has been appointed guest director. The 2013 festival will also feature recitals by Yuka Ishizuka and Syrian pianist Riyad Nicolas. The Brighton festival has everything from visual arts to circus acts and many more.

The Festival of Ideas – Cambridge

For those looking for a more academically grounded festival, Cambridge’s Festival of Ideas promotes the arts, social sciences and humanities through a series of exhibitions, talks and workshops. It is known for attracting world-renowned speakers. The festival offers a range of presentations on the latest scientific theories and challenging historical exhibits. Best of all though, the Festival of Ideas is free! It is one of the largest free festivals in the UK.

One of the world’s largest classical music festivals is the BBC Proms. The Proms offer a huge platform for international artists and enquiring audiences alike. With an a variety of opera and symphony performances, the Proms host over 70 main concerts every year. The BBC Proms are one of the best places to see some of the most talented performers from across the globe. 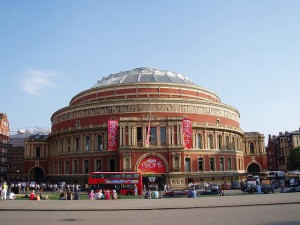 Festivals in the UK – The BBC Proms
Photography by amandabhslater on Flickr (Creative Commons 2.0)

The Manchester International Festival is a showcase of original works from a variety of artists from around the world. It is one of the most exciting international festivals in the UK. There is a high quality of international talent on display at the Manchester International festival. Previous years have featured performances by Björk and Malian musical duo Amadou and Mariam. In 2013, the festival is set to showcase Pakistan born spiritual singer Abida Parveen. Also this year will feature a choreographic interpretation of John Cage’s Lecture on Nothing by Berlin-based dance artist Eszter Salamon.

The Edinburgh Fringe festival is one of the largest arts festivals on the globe. It attracts performances from artists the world-over. Much of the attraction of the Fringe Festival comes from it’s very open and relaxed attitude towards performances being planned. It essentially allows anyone with a show and a venue to apply and perform. This has led to a huge international presence at the Fringe, from some of the world’s biggest artists and performers to hidden gems waiting to be discovered.  It is definitely one of the most popular festvals in the UK.

Calling abroad whilst at Festivals in the UK?

If you are at festivals in the UK without your friends or family abroad, remember that you can make cheap international calls with Pocketdial UK.